Welcome to a new installation here at Society Camp, where we review movies that no one should have ever watched. Unless of course that person happens to have been held captive in some Al-Qaeda stronghold, where your captors, in a moment of compassion, give you a taste of all that American style freedom you’re missing out on. In this instance, it would involve a horrible movie and Arby’s take out, which sounds about as awful as anything they could inflict on you in general day-to-day hostage life.

Today we’ll be reviewing The Benchwarmers, which has to be the absolute worst baseball movie ever made, even worse than all those after school special movies about some baseball team made up of shitty white kids coached by Dean Cain, who somehow beat the clearly superior inner-city team, because Jesus has their backs.

Let me start by saying I fucking love all sports movies, even the really bad ones. I’ll take Angels in the Outfield over some pretentious bullshit like Citizen Kane or The Godfather any fucking day. I know the other options are better, but they  are just not as much fun. I’ll also be honest in saying that watching some wiseguy getting gunned down doesn’t pull at the heartstrings as much as watching Tony Danza’s character, the noble Mel Clark, pitching the final game of his career as you learn, before he does, that he has a mere six months to live before becoming an angel himself. And even though he has no angels by his side in the final game, he pushes through, because you see, he was kinda an angel the whole time, without being an angel, but he will be a real angel very soon. It’s all very complicated, but you get the point, even a shitty  baseball movie is better to me than a really good movie. So you can imagine that if I’m shitting on a shitty baseball movie, it must be really fucking shitty. Though little known fact, Angels in the Outfield did get nominated for two Oscars…in my imagination and deep within my heart.

So save yourself the nearly two hours it takes to painfully watch the entirety of this mess of a movie, and let me summarize why it’s so fucking awful.

1) Rob Schneider. That really is all that should have to be said. Rob Schneider sucks. From his many offensive acting takes on minorities (he’s played the full spectrum), to giving civil rights heroes advice on civil rights, the dude is trash and only relevant because he happened to be on SNL’s second greatest cast (not saying a heck of a lot), and all those movie offers that Sandler, Farley, Spade and the others refused, somehow fell to this talentless comedic shitstain (an eclectic skidmark has more talent than Rob Schneider). Anyway, this pocket sized comedian, who is about as funny as tuberculosis, plays the cool, athletic lead. Right off the bat (baseball pun), that should be all you need to know about this movie. That when casting the leading role of a baseball movie, where the lead was meant to be athletic, hip, and empathetic to benchwarmers everywhere, the best they could do is fucking Rob Schneider. I’d rather eat a Chipotle burrito that I KNEW was 80% E.coli  than have to watch anything with Rob Schneider in it (he was pretty legit in Home Alone 2, however).

2) A baseball team is not made up of three people. Look, I get that sports movies bend the truth and exaggerate for dramatic/comedic effect, but in what fucking world is it okay to have a baseball team made up of three people? For those who may be unfamiliar with America’s favourite pastime, there are nine players on the field, plus bench spots, additional pitchers, and an army of coaches. In Little League you need, at a bare minimum, eight guys on the field unless you want to forfeit the game. But in this movie, there are three players, the aforementioned Rob Schneider, the guy from Napoleon Dynamite, and David Spade. The hook is that Schneider is so good at pitching/hitting homers, that they don’t really need anymore players. I can’t tell if they just couldn’t afford more actors, or thought this was some original and comedic angle, but they don’t even fucking discuss it in the movie until the final game, see below for further details.

3) Did I mention these three adults play all their games against fucking little kids. The reason Schneider is so good is that he’s a grown man (who is never really given a defining characteristic about his age) playing against 12 year olds. Like somehow the audience should be impressed that he can hit dingers and strike kids out that haven’t even tasted puberty yet? And they are so coy about his (and his other two teammates’ ages) that you’re never really sure if they’re supposed to be adult actors playing high school/college kids, or just full on adults (Spade has a fucking bowl cut).

4) Absurd plot. So this three person team somehow enters a Little League tournament (they don’t really explain it, all of a sudden there is a just a tournament). At one point their archrivals bring in a ringer, because I guess they are sick of having a grown ass man strike out all their kids while talking shit. So they recruit the Hispanic guy from Prison Break, and Rob Schneider has a shit-fit saying the guy is not a kid, but an adult, so according to some rules he finally sets out, is not allowed to play. And it’s like what the fuck are you talking about Rob Schneider, you are fucking 40 years old and playing 12 year olds and now you have a problem with another adult? And then to the horror of the movie watching audience who is somehow supposed to be rooting for shithole Rob Schneider, the evil coach of the other team pulls out some forged ID showing that their ringer is 12. So now the other team are the bad guys for lying about allowing an adult to play on their team, against a team of adults.

At this point of the film I was so fucking confused and actually thought that maybe Rob Schneider is playing a 12 year old? Maybe this is just like taking the whole Beverly Hills 90210 adult actor thing to its next, logical level… junior high. But then no, in the final game, after you find out that Rob Schneider was actually a bully in high school and loses the support of all their fans (they somehow have amassed a huge online following) a little person makes an impassioned speech in his defence, and Schneider sees the error of his ways and decides that he and his other two adult teammates are not going to play in the finals, and instead are going to let a team of ACTUAL little kids play. Which is garbage because those kids suck, and a sports movie is supposed to end with a climactic final game where adversity is overcome, and not some tenuous moral lesson (the good team lets the bad team filling in for Schneider’s adult team win). So no one really wins, except humanity and compassion, or some bullshit. 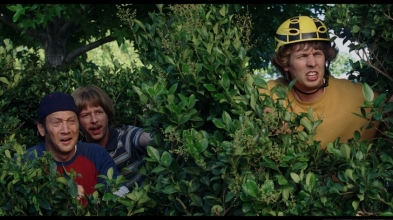 5) A fucking robot. Not a central plotline, but the rich benefactor of the team, played by Jon Lovitz, who looks nothing like a billionaire, so again, who the fuck cast this movie, has a fucking robot. And I’m not talking some shitty fake dog that can like sit and do tricks, but a robot that can make you ANY food item on command. This isn’t some dystopian sci-fi flick, it’s an early 2000s movie taking place in the early 2000s. Where in the fuck is this robot coming from? He should be the fucking lead of the movie if he can just fucking spit out any fucking food item on command. That is some Star Trek level wizardry.

6) Team of three breaks down. In the semi-final game of the tournament, all three men of the three player baseball team find themselves on base, and the ump is like if you don’t have a reserve player to bat, you’ll have to forfeit. And it’s like dude, if they had another player wouldn’t he or she be taking up one of the 6 unoccupied positions on the field? And why wait until now, shouldn’t this have been raised at the start of the tournament, when it was pretty fucking obvious that there were only three men on the fucking field? It’s literally the first and only time in the movie where they discuss the fact that there are only three goddamned players on the team. But fear not, there is some random dude/fan of theirs sitting on their bench in a uniform and they are like, phew, we forgot about him, he can come in and save the day. It’s fucking insane.

Just the shitiest movie ever made, after Pear Harbour of course, which is absolute horseshit, just some overacted and unnecessarily complex/confusing war movie, that also centers around a woman hedging her bets on whichever good looking pilot stays alive. She literally goes back and forth three or four times, thinking one is dead, then he’s not, then you think the other is dead, and he’s not. And it’s like a dating show game where the woman chooses whoever has a pulse. Anyway, The Benchwarmers is absolute trash and on my deathbed I’ll just be cursing myself and the powers that be for wasting two hours of my precious life on it (full disclosure, I’ve watched it three times).

Rating sentence: Anyone involved with the making of this movie will receive six months at Society Camp. I’m not even joking, this movie makes me furious for the glaring plotline holes and inability to understand how basic baseball principles work.

Reform punishment: Ideally, I’d make the most of their lengthy stay and make the writers/producers/cast watch good baseball movies, pretty much anything with Kevin Costner in it, and again, many of those are shit, but to borrow from drug vernacular, the good-shit (and using cocaine is kinda like watching a bad sports movie, as it may waste away days/months/years of your life, but can make for a really fun Friday night). But no, that would be too kind. Instead for six whole months, from morning till night, I will make them watch The Benchwarmers. I give it two days before they lose all sense of reality and fall into an irreparable cycle of misery, despair and absolute hysteria.