I should start this little ditty by saying I fucking love going to the grocery store. I can easily spend hours, even days, wandering the aisles and gleefully spending my time squeezing all the French breads (soft interior, crispy on the out) and looking for exciting new condiments, which now make up roughly 80 percent of my fridge. The trick, however, is going late on a weeknight so you have the place completely to yourself, which allows you to avoid the wretched masses who turn the beautiful experience of grocery shopping into a living, fucking, nightmare.It boggles the mind that with our modern advances of online shopping and extended store hours, that people are still brave (or stupid) enough to go to Costco on a weekend, during daylight hours, which is more painful than getting shot by a cannon. I would literally rather eat nothing but dirt and vermin than have to spend a second of my precious life waiting for an army of people to move their goddamn carts while they stuff their stupid faces with free samples and load their carts up with enough toilet paper to clean the asshole of every last survivor of our impending nuclear Holocaust. When the world is burned to the ground by overlord Trump, the landscape will be filled with nothing but misery, death, and an endless sea of toilet paper and bulk chip bags.

It’s not a complicated process. You walk up and down aisles, put food in your cart, and pay for it. But no, you assholes have to go around and make this beautiful experience about as pleasant as an appendectomy. I can’t imagine the poor fuckers who work at grocery stores and have to deal with such shitty behaviour on a near constant basis. I would guess that roughly 97 percent of serial killers at one point in their lives worked at a grocery store, and the remaining 3 percent as teachers, because spending your days raising other people’s shitty kids would be enough to commit some seriously heinous crimes.

In order to ensure that you don’t contribute to our society’s future killers, we’ve compiled a list of rules to follow when buying your over-processed sustenance.

1] Handle your cart with aplomb: What is this shit with people leaving their cart littered across every orifice of the aisle? You can’t just leave your cart in the middle of the aisle, creating a traffic jam while you peruse strawberry jams. Tuck it off to the side of the aisle and don’t walk away from it. Pretend it’s your toddler: keep a hand on it, keep it quiet and keep it out of the fucking way. I’d like to call this rule the Three Ks, but a bunch of pieces of shit in white sheets got there first. 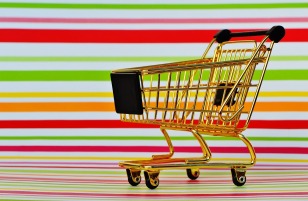 In addition, when you’ve finally paid for your cornstarch filled garbage, and make your way to your gaz guzzling, American built garbage mobile, and empty said food garbage into your garbage car, don’t just leave your cart in a parking spot or on the curb, as though it’s, you guessed it, garbage (also you shouldn’t litter actual garbage, you moron). Instead, walk your lazy ass to the cart corral and place it correctly into another cart. That way, you aren’t recklessly leaving the cart in the parking lot where it will invariably smash into my car and dent it to shit. Also, by correctly and gently inserting it into another cart (grocery porn), you’re making it easier on the person who is paid minimum wage to herd those fuckers back to the store in one of those insanely long cart trains that is the grocery store equivalent of the human centipede. 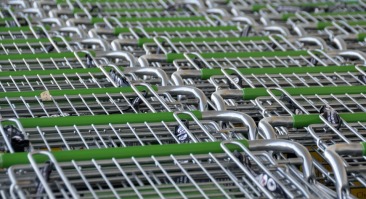 2] Don’t put frozen foods on shelves: I’ll be the first to admit that I’m not the best at putting stuff back to where I grabbed it. We’ve all been there, you threw some item into your cart and then a couple aisles down found a similar product on sale (or your inner voice told you that you don’t need that fourth bag of Doritos, in which case, your inner voice should go get fucked) and you place the rejected item back in some random spot where it doesn’t belong. Sure it’s a dick move, but at least someone is getting paid to fix that error, so in a way, your reckless food item put back game is helping our fragile economy.

This behaviour, however, is not okay to do with frozen or refrigerated goods. Because now, one of two things happens. One, the item will have to be thrown out and you’ve added to the awful food waste that plagues our societal landscape (you’re already going to throw out all those damn vegetables you just bought, so don’t add to that). Or two, some underpaid and undervalued worker will just place the item, which has been sitting out for hour or days, back to where it belongs, giving someone a two week diarrhea voyage in the process, because ground beef or frozen fish can’t be left out for a fucking day and then be safely consumed – trust me, I’ve tried. I’m not saying you have to put it back exactly where you found it, but at least find a freezer or fridge section so you aren’t killing someone, or more importantly, the planet.

3] Fuck self-checkout in its stupid face: Self-checkout has to be the stupidest, most backwards form of automation ever. It takes longer, doesn’t cost less, and is just an utter pain in the ass. So you are going to charge me the exact same price, but ask me to do all the work? Finding the goddamn eggplant code takes more effort than I put into my actual job. Every time I make the mistake of going through the self-checkout, I curse the heavens when flipping through pages and pages of different bread items and produce. I don’t read real books, so why in the hell would I flip through the digital equivalent of one filled with produce prices?

And then you have these assholes who show up with a full cart and take a fortnight to run their own groceries through the complicated process. I once watched a guy with a grocery cart that was so full it reminded me of those old-timey movies when miners stock the fuck up before going out into the frontier for six months to make their fortune. This guy was taking his sweet time, as though the whole process was some yoga retreat. He had to ask the self check-out supervisor to help him at least 17 times. There should be a 10 items or less rule, so we don’t have these people occupying space and time for a process that is supposed to be quicker than the regular checkout aisle. Really, just scarp this whole boondoggle and get more express aisles and stop replacing jobs with robots when it’s completely arbitrary and adds no value to the consumer, but instead, actually detracts from the whole glorious experience that grocery shopping should be.

4] No encroaching on checkout personal space bubbles: What is it with these people who just can’t fucking wait to start putting their shit on the conveyor belt while itching their cart close and closer to the cashier? Until I have placed that plastic divider on the belt, that space is mine. Keep a safe distance back and fuck right off. Also, once you’ve been granted access to the conveyor belt, keep your cart at bay. I don’t need you ramming your cart directly into my sphincter while I’m trying to pay for my Triscuits.

And while we’re on the subject, when did baggers disappear from the whole checkout process? I never feel as much pressure in life than I do when I’m trying to bag my own groceries while someone else is being rung through. I’m breaking eggs, putting heavy squashes on soft breads, and just making a complete ass of my self while destroying my carefully selected groceries in the process. When I suddenly stumble upon a grocery store that has someone bagging, I have to literally rub my eyes in astonishment. I will pay twice as much for my Lean Cuisine if it means someone will put it into bags for me. Let me enjoy the last few moments of my grocery store bliss, and not leave on a sour note.

There are so many more rules to discuss, in order to ensure that grocery stores don’t become the ultimate shit-stain of our society (surpassing roadways and internet comment sections). However, I’ve recently been told that I’m too verbose and that I need to shorten these stupid posts to something palatable (which for most of you rubes would be the length of a Tweet). So let me just leave you with this parting sentiment and say that grocery stores give us endless food choices (for better or for worse) and a brief escape from this cold, desolate world. Don’t bring your shittiness into their warm and welcoming neon glow and the fresh-baked bread scents they ooze from every vent. You’re literally ruining the last place in the world that I enjoy. 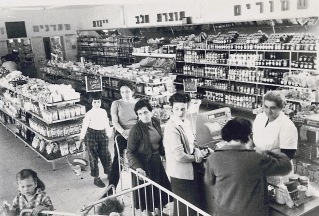 Sentence: Anyone caught being a dickbag in a grocery store will get a half-day sentence at Society Camp. I feel like we’ve really been heavy-handed lately with sentencing, so I’m trying my best to be what you folks would call ‘nice’. Did you notice how fucking nice I’ve been lately? So fucking nice is the answer.

Reform Punishment: Speaking of being nice, for this reform punishment you will be invited to our Society Camp grocery store, which is a pretty magical place. No self-checkout, no kids, no Ryan Seacrest blaring form the speakers. And we have no doubt that our product selection will leave you beyond impressed. Imagine Whole Foods, but affordable, less pretentious, and not wreaking of Jeff Bezos’ after-shave. For this reform punishment, you will have to spend your sentence buying a month’s worth of groceries at this wonderful grocery store. Sounds sweet right? Here’s the catch though, you’ll only be allowed to buy Guy Fieri branded foods and merchandise. So you will pretty much just be eating shitty bbq sauce and frozen ribs for a month, while his picture beams from your every cupboard and fridge space (literally just got a cold shudder down my spine). I imagine that if a Troll doll and a Hell’s Angel member mated, and were only allowed to dress their child in garments and accessories bought from Ardene, that jewelry store for kids that sells mostly chocolate/bubblegum flavoured lip balms, you’d end up with Guy Fieri. Bon Appétit!

I feel that if someone based an entire political campaign on grocery store etiquette and stricter laws (death penalty) enforcing the use of car blinkers, they’d win in a landslide. One day I’ll be President and the world will be less awful (though I have a hard enough time balancing my own budget so my plan of buying everyone a puppy, a Margaritaville frozen drink machine, and an electric car, will most certainly bankrupt the entire nation, but we’ll all be happier for it in the end). 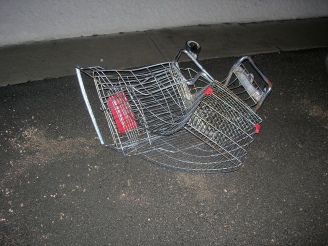