Another Christmas season has come and gone. Now all you are left with is debt, a lack of sleep from travelling too much and the comfort that comes from knowing that you’re now one step closer to diabetes. Here’s the thing about Christmas and the holiday season in general, it makes people raging assholes. It’s supposed to be a time of togetherness, whatever the hell that means. A time where we are supposed to give back to the needy, spend time with the people we are forced to love, and just generally enjoy peace on earth, which of course is something we’ll never be able to do. After experiencing another year of people being pissed off at those who don’t say the ‘right’ greetings, or didn’t buy the ‘right’ presents, we here at Society Camp have compiled a list of easy to follow steps to help you not be such a dick during the holiday season.

1) Don’t go all Ben Stein on those who say Happy Holidays, and don’t get all judgmental with those who say Merry Christmas. Pretty much, let people say whatever it is they want to say. Some people observe Christmas, some don’t.

They aren’t trying to shit on your Christian values by saying Happy Holidays. And those who say Merry Christmas aren’t trying to offend people of other faiths. They are just jovial greetings that all pretty much mean the same thing. And don’t start boycotting Starbucks because they decided to rid stupid words from a stupid cup. If anything, boycott them because their coffee tastes like garbage and they are a shitty corporate entity that tries to come off as some Bohemian, local coffee shop that really cares about the community. Also, if your Christmas hinges on corporate greetings, you are beyond saving. Though just a word of caution, wishing a Happy Kwanzaa to someone just because they’re black is not festive, just racist.

2) Don’t judge people on what they spend. More than once this holiday season, I’ve heard people complain about people who either spend too much, or too little, on gifts (for those who judged the use of ‘holiday season’, I hope I made you so mad that you just dropped your newly gifted coffee mug, watching it shatter into a million little pieces and spilling expensive gifted coffee on your new socks from Nordstrom’s and the new rug you bought yourself on boxing day).

Look, if the year-round neglect you inflict on your children is rectified by buying expensive gifts, go for it. I really don’t care, you’re helping some business somewhere and not spending as much money on whatever it is you usually spend it on (alcohol). And if you think a single gift is what it takes to bring a smile to your friends and fam, that works too. People have different bank accounts, different spending habits, that is life. They aren’t being monsters for spending that money on the people they love, and they aren’t being cheap if they choose to spend their hard earned money on other things throughout the year. In the Netherlands, people gift each other something they’ve made or written, like a shitty poem, coupled with an orange. Sure as a kid it must suck to get some poem from mom talking about how much she loves you, but when older, that memory may mean more to you than some toy you forgot about a week after receiving it. But at the same time, poems and oranges don’t play video games, and I will never forget the Christmas I received my SNES. Either way, let people spend, or not spend, whatever the hell they want and just do your own thing. It doesn’t mean you love your kids more than the Dutch if you spend the equivalent of Madagascar’s GDP on their stupid gifts. Also, have you actually been to a mall or box store during December, it’s a fucking nightmare. People turn into tension filled, bloodshot eyed and rage filled lunatics, fighting over parking spots and overpriced junk made by children in Bangladesh. This is a direct outcome of having to spend your savings on people you see once a year and who are mostly in your life due to genetics and unprotected sex. Anyway, just do whatever the hell it is you want, just don’t judge others for what they spend on gifts.

3) Don’t send me a card. I didn’t send you one. Now I feel guilty. I chalk it up to me caring more about the environment than you. It’s like the whole thank you note thing. Is there anything worse? You receive some gift you probably didn’t love to begin with, and then have to remember who gave it to you and send them some overpriced stationary talking about all the times you’ve used some shitty pasta maker, when really, I threw it in the garbage the first time I tried it. Have you ever tried making pasta? Who the hell would go through that mess and hassle for something you can buy for 99 cents. And yes, I know fresh pasta tastes better than the dried stuff, but that is why Italian restaurants exist. Also, the grocery store now sells this thing called fresh pasta, for like three dollars, and you don’t end up with flour in every facial orifice and kitchen crevice. But yeah, don’t send me a card of any kind. Your friends and family probably feel the same. I rather get nothing at all, than a gift with strings attached to it in the form of forced correspondence.

4) Do something altruistic or kind for someone in need. I’m not saying you have to spend the whole month working down at the soup kitchen (though that would be swell of you). But if you’re in a position to give back, give some money to the mission, or organize some basket of food or gifts for a needy family.

Just do something that will make the holidays slightly less shitty for the many people out there in this cold world with no tree, gifts or family to keep them warm. Doesn’t have to be spending money, try volunteering some of your time. There are plenty of opportunities out there for you to be less of a shitty person, and guess what, it may also make you feel slightly better about yourself for giving back, but take it easy, you’re not Mother Teresa because you gave five dollars to a homeless shelter.

5) Don’t use the Elf on the Shelf as some mind control tactic on your kids. If you want to spend the time and energy to set up fun Elf on the Shelf shenanigans to bring a smile to your kids’ face, I’m all for it. But if you use it as some Big Brother tactic, making your kids think they are constantly being watched by some creepy fucking Elf who is hell-bent on ruining their Christmas if they do anything ‘wrong’, you are a shitty parent. Don’t teach your kids that their privacy is something that exists only for your own sense of control, let the oppressive political system of the day do that for you.

Look, if you have good kids, they don’t need the stress that comes with thinking that they are always being watched. And if your kid is a little shit-bag, a stupid elf on a stupid shelf is not going to correct that, if anything, it will make it worse. Fuck that twisted little elf, can someone please start an Imgur page of various ways to murder that little societal shit-stain, such as tying little concrete blocks to his feet and drowning him in the tub, his bulging eyes looking up at you as he sinks to the porcelain sea floor, plotting his revenge from beyond the grave (that would be a great movie, Elf on the sHELLf).

6)  Don’t judge those who do, or don’t do, the religious thing. I’m a non-practicing Jew (though embrace the religion at times, for the jokes) who loves the shit out of Christmas. But I won’t set foot in a church, it’s just not my bag.

The other day, I heard some hoity-toity lady talking about how Christmas has become nothing more than a commercial holiday, where people forget the whole point, the birth of our Lord and Savior. First of all, Jesus was not born on Christmas, sorry to burst your bubble. And also, he may be your lord, but that doesn’t mean that everyone has to believe the same make-believe tales you do. If that were the case, I’d expect everyone to pray to my Lord and Savior, Larry David. Christmas means different things to different people, so don’t try and impose your beliefs on others, and I won’t judge you for thinking that Jesus was some white dude who came back to life so your kids could hunt for hidden chocolate eggs. I lied, I’m totally judging you. But that doesn’t mean I have a problem with people who go to Church on Christmas (or anytime really) because that is something that brings them joy and an opportunity to get together with family and friends. I get that, and the whole sense of community that comes with the ritual. But some people may be just as happy doing that at a Chinese buffet (let’s be honest, everyone would prefer that, Chinese buffets are amazing). I would totally go to church if it was a Chinese buffet. “Thank you Lord for this meal we are about to eat, R-amen” (Chinese buffets have some Japanese stations, it works).

7) Ugly Christmas sweaters. I’m all for them. Though I really do think they are something that should come about organically. You know, found at Value Village, or dug out from your grandma’s closet. I kinda hate how people just order faux Ugly Christmas sweaters online, especially when all of a sudden, everyone and their dog has the same “Merry Christmas You Filthy Animal” sweater. I’ve literally seen at least 100 people with that sweater. Amazon 1, you 0.

There are so many other rules to follow. But at the end of the day, follow the Christmas Golden Rule: Don’t be a judgmental dick and try and enjoy it.

Sentence: Anyone caught being an asshole during the holidays, will get a full day at Society Camp.

Reform Punishment: You will be forced to eat a day-long meal with Donald Trump, who is a year-long resident of Society Camp confined to our maximum security section, where people that somehow should be in jail, are not. You will have to hold his clammy hand for grace, and watch him eat a 12 egg omelet while he talks with his mouth open about what Christmas means to him (hint, he’s big on white Christmases). 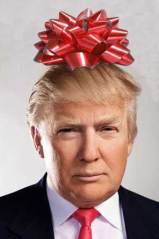