Welcome back to another installment of Fail Bag, where our readers send in what societal atrocities they think are Society Camp worthy. For those of you who haven’t seen your questions up yet, in time. We get literally thousands of letters a day, but most of them are takeout flyers.

Hi Society Camp. I’ve just returned home from a dinner with some friends (I only really like this one couple, the other couple are friends through friends, and they just talk about their kids’ soccer activities, which is about as enjoyable as a round of syphilis). After painfully making it through the night at some overpriced restaurant that thinks it’s legit because it has vintage Edison bulbs dangling throughout and reclaimed wood tables, we were finally free. All three couples made their way outside for the final goodbye on the sidewalk. You know the one, where it takes some ten minutes for everyone to finally leave. Is it just me, or are these goodbyes painful? I’ve just spent the entire night talking to these people, do I really need to spend another ten minutes standing on a sidewalk, summarizing how much fun we had and that we should definitely do it again sometime soon? Just walk out the door and say bye and be done with it, right? Also, people take too long saying goodbye on the phone. I can’t be the only one that hates a long goodbye?

Thanks for writing in, Addison. Is Addison your real name? No offense, but it’s awful. You sound like a calculator from the 80s, when calculators were the iPhone of their time. “Oh nice bro, you got yourself an Addison. Quadratic equations for liiiiife!” But I shouldn’t blame you, more so your parents that were probably naming you after some great aunt that everyone in the family thought was a real salty broad (which by the way, is the name of our Society Camp boat).

Now on to your question, which is a valid one. What you are describing is what we at Society Camp like to call the “badbye”, as there is nothing good about it. We live in a society where people feel the need to always be connected. There is just something so frustrating about the clingy nature of society, mostly because it means that it becomes harder to shake annoying people.

Part of me thinks that the badbye is also rooted in our fear of death. Like badbyers think this could be the last time they ever speak to this schlub on the phone before their artery finally gives, so they better really make it count. 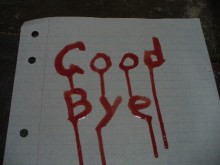 If that’s the case, do you really want the last thing people remember about you to be, holy shit, that guy could not take a fucking hint on the goodbye front. Your headstone: “Here lies Joel, he always insisted on multiple different goodbye hugs and someone finally poisoned him with mercury for it”.

There are several different types of badbyes, all with the common theme of being a waste of the precious few moments we have on this cold and desolate planet.

Sidewalk Badbye: We have very strict views on sidewalk etiquette, so this one is doubly annoying. You leave a restaurant, where you’ve already had to spend too much time and money on people that you enjoy about as much as a Everybody Loves Raymond re-runs, only to spend another fifteen minutes on the sidewalk talking about when the next time you can all get together is, which you can never respond ‘never’ to, even though you really want to. People even do this in the winter, making a painful situation even more so thanks to the impending threat of frostbite. You’ve left the restaurant, give each other a nod, maybe a handshake or a professional fist bump and be done with it.

Party Badbye: Parties, the societal prison for the unincarcerated. When you’ve put in your required two hours and can finally leave the shitty party you were forced to go to, you then have to spend another fifteen minutes walking around telling everyone bye and “sorry we didn’t get to talk, next time”, even though we both know I avoided you because your breath smells like oysters and I think your views on how ‘the Big Bang Theory is the greatest show ever made’ are borderline hate speech. And then you finally make it to the door to get your shoes and get the hell out of Dodge, only to have the hosts come out and talk to you for another ten minutes while they look for validation on how great their place is, even though it just looks like Ikea threw up all over it after a night of bad decisions.

We should just get rid of the whole process. You leave a party, you simply put your shoes on, don’t look anyone in the eyes and walk out, but not before spitting on the floor as a reminder to the past when people used to waste their time with stupid goodbyes.

Phone badbye: You know the types, the people that just can’t shut the shit up on the phone. There are certain people I just won’t pick up as I don’t have an hour of my life to donate to their feelings and need for expression. Send me an email that provides me with updates on your job, hobbies, love life and political musings, so I can quickly respond “cool” without ever having read it and delete it promptly. See how much easier that was? But no, people love the phone call while they do their best to keep the 20th century alive. Just let it die and leave me alone. But if you do happen to somehow trick me into picking up your call, when I say I have to go, don’t take ten minutes telling me how great it was to catch up while you try and start another conversation about the weather. When I sense a lull in the conversation or have had enough, I just say “alright, that’s my limit” and hang up. Quick and effective like pulling off a band-aid…it may hurt for a second, but it’s for the best.

TV Show Series Finales Badbye: When it’s a good show, you’re sad to see it leave, while also developing unrealistic expectations for how great the finale will be. The moment the credits role, you end up feeling empty and disappointed. When it’s a shitty show, you can’t believe how long it’s been on the air for and is now getting all this extra validation and attention for how such a shitty show was able to remain so successful for so long. Either way, good show or bad, the finales stink and for some can be about as heartbreaking as summer-camp goodbyes (I never went to summer-camp, preferring the society variety, but I imagine it was hard saying goodbye to all these new friends only to return to a school where everyone hated you). TV shows shouldn’t leave you feeling conflicted and emotional. I bet some people cried more during the shitty Friends finale than they did at their own parent’s funeral.

Retirement Badbye: You’ve been around these people for what, 35 years, why spend another minute with them? Not to mention all the faux promises of visits, like the thought of being without your colleagues will kill any semblance of personality or meaning you’ve ever had.

And once the retirement party is done, people all stand around, just not wanting to believe that the second they leave, they’ll never see stupid Doug and his funny/seasonal ties again. And Doug stands there, fighting the tears and just can’t believe he’ll probably never see these people that he was forced into relationships with, ever again. But really, ten minutes later, once everyone leaves that lame party, they won’t give a shit. We are forcing a badbye on their already fragile psyches, just because some dude is finally free from the hellish reins of a day job. When I retire, I’ll be sure to call in sick on my last day.

In general, all goodbyes are garbage. Sure, if someone is dying, make an effort, but do you really think they want to spend their last few breaths watching you trying to navigate an awkward badbye? “Sooooo, Uncle Douglas, how about them Blue Jays?” He won’t even get to see them win the World Series, you asshole.

Sentence: Anyone caught leading or supporting a badbye, will be force to spend half a day at Society Camp.

Reform Punishment: You’ll be forced to watch a loop of that bullshit scene in Titanic, when Rose and Jack say goodbye. I mean, it’s just some rich lady who has had enough of toying around with a commoner in the dusty confines of a doomed vessel, essentially murdering him because she can’t bare the social shame of people finding out she got it on with a chimney sweep, or whatever lowly station Jack occupied. We all saw that plank of wood, you could have fit an entire circus on that thing. If anything, she didn’t even try for the long, drawn-out badbye, she just pulled the “I’ll never let you go (symsymbolically)” before letting go without a second thought. Those are the actions of someone who not only deserves an extended stay in Society Camp, but probably prison as well.